Andrew Davison, reader in Robot Vision at the Department of Computing, Imperial College London, organizes every year as part of the Robotics Course a competition amongst all students where groups compete to build and program the robot which can most effectively achieve a certain challenge against the clock.

2012's challenge was to build a robot able to cross in the minimum amount of time an area filled with randomly located obstacles without bumping into any of them.

Our team of four (Antonio Azevedo, Clemens Lutz, Francesco Giovannini and myself) developed a solution based on an occupancy grid mapping technique that was adapted for high speed computation. Our robot relied on accurate odometry for self-localisation, and used a medium-distance sonar along with proximity active light sensors to detect obstacles. The data from the sensors was first gathered into a coarse-grained occupancy grid and a fast-planning algorithm was then used to find the optimal path to the destination. A thiner-grain grid was finally computed only along the route taken by the robot, hence decreasing computational needs. All grids were able to update near real-time without noticeably slowing down the obstacle detection, thus allowing to increase drastically the robot's speed. 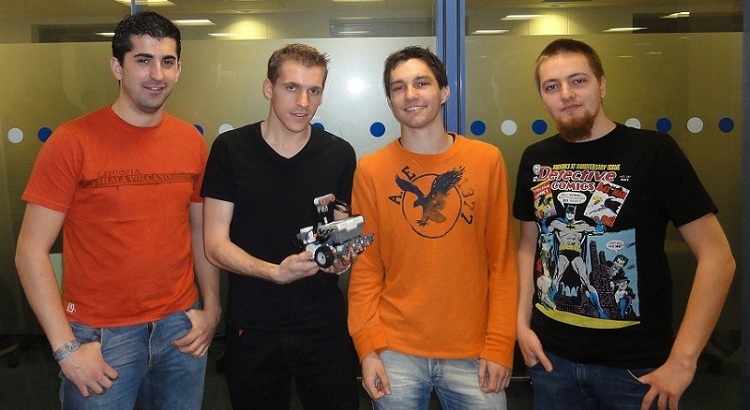